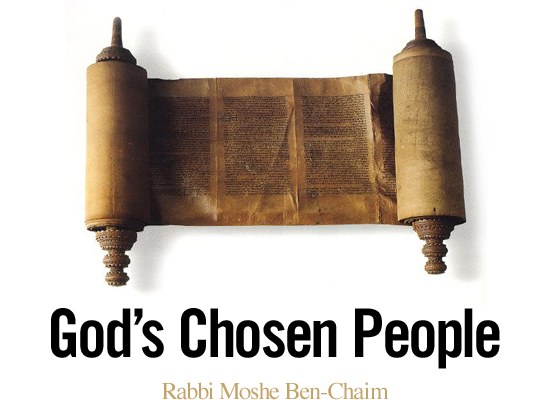 In his recent article, “Enlisting the Biblical Abraham as Peace Broker” (Opinion, WSJ Nov. 8) Jon D. Levenson concludes, “…and in each religion he [Abraham]  is in relationship with a living God who has called a particular community to his service. Instead of attempting to devise some vague pan-Abrahamic religion that elides the actual differences among the three in the name of a bland universalism at odds with their scriptures, we should be wiser to confront the differences honestly and respectfully. The alternative isn't only too easy. It is also false.”

Mr. Levenson stands for truth, and correctly suggests peaceful confrontation of the differences between Judaism, Christianity and Islam. Lying about one's views will not achieve the intended peace. Mr. Levenson correctly accepts the unequivocal truth of the Hebrew Bible – the Torah – for he identifies questionable ideas as those not found therein. I will proceed to present as religious truth, only those ideas and principles derived from the Hebrew Bible, which equally demand an honest rejection of all conflicting views.

The most primary truth of Judaism, is that Judaism is about truth, i.e., it is not a system of “belief” as are the world’s religions. Judaism is a science, demanding the same level of reason, analysis and proof required in unraveling the mysteries of the universe and in understanding the natural world. Both of God's creations – the Hebrew Bible and the universe – equally reflect His wisdom. As it takes scientists and mathematicians decades of intelligent analysis and reason to understand nature, the study of the Hebrew Bible is no less deep and abstract, and requires that same level of intelligence.

Using intelligence, but more precisely, the Hebrew Bible's unique method of exegesis, I wish to correct Mr. Levenson's suggestion below:

“But the familiar image of Abraham as the discoverer of the true God and the uncompromising opponent of idolatry isn't found in Genesis or anywhere else in the Hebrew Bible. It is an idea that originated in Judaism after most of the Hebrew Bible had been composed, and from there it spread into the literature of the Talmudic rabbis…”

This is not true; both on a literal reading and using the methods of exegesis. Abraham literally says to Sodom's king, “…I raise my hand to God, the supreme power, owner of heaven and Earth (Gen. 14:22).” Not only did Abraham swear by God in this case, and repeatedly teach of monotheism “calling out in God's name”, (12:8, 26:25), but he was known as a monotheist, “And it was at that time that Avimelech and Pichol his military officer said to Abraham, ‘God is with you in in all that you do (Gen. 21:22).’ ”  Abraham's reference to God, is the “supreme power”, the Creator. This is monotheism: the conviction in a singular cause for the universe Who must therefore be a supreme power. The Hebrew Bible teaches that Abraham enunciated his monotheism, and that he was a famed monotheist.

Using the Hebrew Bible's unique methods of decryption, mastered only after decades of devoted tutelage under Rabbis trained by others back to Moses, we can unlock a message that Mr. Levenson has pointed us towards with his question. That message is that Abraham’s beliefs are best portrayed, not in mere statements, but in acts of devotion. God's records of Abraham are primarily about his trials, specifically his sacrifice of Isaac. Mr. Levenson's question makes us realize that God's way of teaching us of Abraham's monotheism, is through his trials. Yes, Abraham swore to Sodom's king, but God records his numerous trials and how he succeeded in them all. For it was Abraham's sincere devotion that we learn his truest convictions. It is the literal read of the Hebrew Bible that leaves much to be desired, and therefore cannot be read literally. However, the Talmudic student is trained and can detect the deeper, intended messages.

What about Abraham’s platform of rejecting idolatry…was this not equally as vital as Abraham's publication of monotheism? Where, then, is this found in the text? Again, a literal read does the Hebrew Bible injustice.

God's message via omission is that Abraham's purest and most fundamental rejection of idolatry, is his conviction in God's absolute and exclusive role as Creator. There is nothing else. Thus, statements like "Abraham rejected idolatry" would actually fall short of the intended lesson that idolatry is rejected, primarily due to the truth that there exists a Single Creator. Additionally, Abraham's rejection is also derived from God's selection of Abraham and Isaac throughout the Hebrew Bible. God chose Abraham and Isaac...as they chose Him. In other words, God validates Abraham’s monotheism, to the exclusion of all other deities.

Mr. Levenson also wrote, “…we should be wiser to confront the differences honestly and respectfully.” I agree fully. Revelation at Sinai is the event that sets the tone of Judaism: based on the millions of eyewitnesses, it remains the only event offering proof that God ever revealed Himself. It is clear: God desires mankind to possess proof, not belief, for He granted mankind the intelligence to discern proof from belief, and He also offered proof of His existence and His will for mankind through that Sinaic event. All other claims of divine revelation lack the masses necessary to eliminate fabrication, or include contradictions, thereby reducing those claims to questions or mere belief – not proof. (See www.Mesora.org/God – Rabbi Israel Chait’s seminal essay on Revelation)

Possessing only one proven Revelation, the event of God's gift of the Ten Commandments and the Hebrew Bible at Sinai, let us remain true to His words found therein, which include the prohibition to add or subtract from the Hebrew Bible (Deut. 4:2, 13:1).

Mr. Levenson quotes the apostle Paul who declares in the New Testament, “It is not the children of the flesh who are the children of God, but the children of the promise.”  Meaning, Christianity views those following their Gospel, as Abrahams “seed”. Unlike Christianity, God said numerous times it is Abraham's physical seed from Isaac who are his true heirs (Gen. 14:4-5, 15:18, 17:7-9, Deut. 10:15 and other verses). God also rejects Ishmael as Abraham's heir, “Ishmael will have 12 princes and be a mighty nation. But My covenant will be established in Isaac to whom Sarah gave birth (Gen. 17:20,21)…”  Also, “God said to Abraham, ‘Do not be aggrieved regarding the lad [Ishmael] and your maid [Hagar]; all as Sarah said to you [send them away] you shall perform, for in Isaac will your seed be called’ (Gen. 21:12).”  Furthermore, Abraham follows God's covenant, “And Abraham gave all he possessed to Isaac. And to the children of Abraham's concubines, Abraham gave gifts and he sent them away from before Isaac his son while he was yet alive eastward towards the land of Kedem (25:5,6).”  God says Isaac alone carries on God's covenant of the chosen people.

But God's chosen are not a closed group. A Jew, although the proper seed, can forfeit his place in God's covenant through violating God's word. A Christian, Muslim and gentile can equally share God's covenant, provided His word is upheld without distortion. This is sensible, as God created every human for a reason. And that is for the sole purpose of following Him. He desires all mankind to benefit from His directives. If this truth were shared, God's will would become known to all. Sadly, instead, many Jewish leaders and even Rabbis compromise God's messages, falsely suggesting all religions lead to God. The Jew who hides God's true word preferring social acceptance, violates God. He makes man his false god. And there are many such Jews.

And we must understand that God’s selection of the Jew, is not for the Jew, as many arrogant and misguided Jews think. God says otherwise, “And you shall watch them and keep them as they [the commands] are your wisdom and understanding in the eyes of the nations, who will hear all these statutes and declare, ‘What a wise and understanding people is this great nation. Because what great nation has God close to them like God, whenever (they) call to Him? And what great nation has statutes and laws as righteous as this entire Torah’(Deut. 4:6-8)…”  Clearly, God desires ‘all’ nations to recognize His wisdom, and this is achieved only when the Jew properly performs the commands, and defending Judaism honestly and completely. Don’t we see how concerned Moses was that his gentile father in law recognized God? God Himself selected the Jewish kings from Ruth, the gentile, for human perfection is not a birthright, but something accomplished, and by any human being. Even the Jewish messiah will eventually be a descendant from that gentile, Ruth. World religions are correct in their claim that only one religion is sensible. There is only one human race; it is reasonable that there is only one will God has for all people, for under our skin, we are identical creatures.

God's Hebrew Bible is truth, He does not play favorites. The Jew should take no credit for an act that was not his doing, I mean being born to Jewish parents. Let the Jew – and any human being – take credit for accomplishments alone. And let all peoples strive to accomplish an honest search for, and fulfillment of God's word.