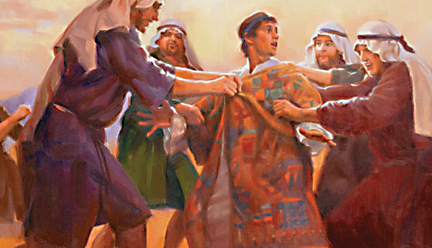 The Selling of Joseph

The Torah in Genesis Chapter 37 describes in detail the manner in which Joseph was sold into Egyptian bondage by his brothers. After accepting the advice of Reuven not to execute Joseph but to place him in a deep pit they sat down to eat bread. Suddenly a caravan of traders enroute to Egypt appeared on the scene. Judah convinced his brothers to remove Joseph from the pit and instead sell him into slavery. The arguments employed by Judah to achieve his goal warrant careful study.

23. And it came to pass, when Joseph came to his brothers, that they stripped Joseph of his coat, his coat of colors that was on him; 24. And they took him, and threw him into a pit; and the pit was empty, there was no water in it. 25. And they sat down to eat bread; and they lifted up their eyes and looked, and, behold, a company of Ishmaelites came from Gilead with their camels bearing gum, balm and myrrh, going to carry it down to Egypt. 26. And Judah said to his brothers, What gain will there be if we kill our brother, and cover up his blood? 27. Come, and let us sell him to the Ishmaelites, and let not our hand be upon him; for he is our brother, our own flesh. And his brothers agreed.

The Difficulty of Judah's Statement:

The statement of Judah contains two problems: 1) Judah seems to base his argument against killing Joseph on the factor of expediency. It is not profitable to kill him for then we will have to cover his blood i.e. endure the burden of maintaining a cover up. However, after proposing to sell him to the Ishmaelites (verse 27) he offers what seems to be a second reason. For he is our brother our flesh. We may ask: Was the proposal to sell Joseph based on the desire to avoid the practical consequences of hiding a murder, or on the moral prohibition of killing ones brother? These are two entirely distinct ideas and yet Judah utilized both of them. What is the underlying thread that unites these seemingly separate arguments?

2) There is a fundamental problem with Judah's argument about covering the blood. The simple interpretation is that the plan of selling Joseph would remove the need for a cover up. Yet it is clear from the story that such was not the case. After selling Joseph, the brothers dipped the coat in blood and presented it to Jacob, who concluded, a savage beast has devoured him. Thus they were forced to cover up the crime of selling Joseph. It is reasonable to assume that had they adhered to the plan of Reuven and left him to die in the pit they would have followed the identical procedure. In effect, they had to engage in a cover up whether they killed Joseph or sold him. However no one challenged Judah on his argument. It was accepted that his plan removed the need to cover the blood. Yet this is contradicted by the presentation of Josephs bloody garment to Jacob. We must therefore ask: What did Judah really mean when he said, what gain will there be if we kill our brother and cover his blood?

Who is Wise? ask the Rabbis one who foresees the future. This common translation is a bit misleading. For man, unless he has prophecy can not foresee the future. The Hebrew term used by the Rabbis in this teaching is Nolad which literally means something, which has come into existence. Thus, the wise person is one who can foresee the outcome of a scenario on the basis of the underlying causes that are already in existence (the Nolad). He can anticipate the inevitable results of his actions because he does not flinch from confronting the consequences that are visible to those who have the courage to discern. The Wise person (Chacham) is not merely one who has intelligence; for many intelligent people walk in blindness. Their intelligence operates only in areas that are compatible with their feelings. The Chacham bases his entire life on wisdom and subordinates his emotions to the rule of reason. He foresees the outcome because he lives in accordance with the abstract reality though it is not apparent to his senses or pleasing to his feelings. For him the reality that is perceived by the mind is of paramount importance.

Most people err because they operate on the basis of certain false assumptions. This usually happens when they are under the sway of powerful emotions. When a person is in love or under the grip of a compelling fantasy he is convinced that the emotion will stay this way forever and that since it feels so good it is impossible that anything negative can be associated with it. Thus he is unable to anticipate the outcome.

Let us examine the state of mind of the brothers when they decided to destroy Joseph. These were great men who operated on the basis of wisdom. True, they were mistaken about Joseph but they deliberated in accordance with their understanding and found him guilty. The Torah indicates the psychological serenity of the brothers by recording that they sat down to eat bread (verse 25). The point of conveying this detail is to show that they were not in a state of emotional frenzy when they cast Joseph in the pit. In their own minds they felt confident that they had acted correctly in preventing Joseph from realizing his dreams of grandeur

Judah dissented from the plan they had adopted. He asked: What will we gain if we kill our brother and cover his blood? The key word is kill. Casting him in the pit where he will die naturally instead of directly executing him does not absolve you from murder, he argued. This may not bother you now but one who is wise anticipates all the consequences of his actions, physical and psychological, visible and hidden. At the moment you feel no guilt. You have entirely disassociated yourselves from Joseph and you imagine that you will feel this way forever. However there are psychological and emotional ties which can be suspended but not permanently broken. Thus we will always have to live with the knowledge that we killed our brother and because this is too painful we will have to repress it from our consciousness. Judah was not referring to a physical cover-up of the murder but to a psychological repression of it when he said, what will we gain if we kill our brother and cover his blood? Verses 26 and 27 now flow smoothly. We can now understand the connection between the two elements in the argument of Judah. It is an impractical plan to kill Joseph, he said, for then we will have to repress the guilt that will surely emerge to haunt us. Let us, therefore sell him to the Ishmaelites for he is our brother, our flesh. This is the essence of his argument. The psychological ties that bind us can never be broken for he is our brother, our flesh. The words our flesh would, at first sight, seem redundant. Yet, they are necessary for Judah is seeking to convince them that such a powerful identification cannot be broken.

The Lesson of Judah's Argument

Judah's brilliance consisted of his ability to foresee the hidden consequences of a self-defeating course of action. Most of the suffering people experience in the world is self-induced (see Maimonides: Guide for the Perplexed, Part III, Ch.12). A prime cause of sin is the inability of people to look beyond the immediate effects of their action. The anticipation of pleasure paralyzes the mind. Few people have the ability to think beyond the moment of pleasure and contemplate how they will feel on the morning after. Even those who think in terms of consequences usually can only deal with those that are very obvious. If Cain had known that he was destined to cry, my guilt is too great to bear would he have killed his brother?

Since man is a complex being no course of action is ever as simple as it appears. Sin carries many dangers, which are not apparent from the vantagepoint of the one who is in a state of lust. The ultimate effect is one that few people ever consider: the loss of ones relationship with God. This was clearly enunciated by Cain when he said: Behold you have expelled me from the face of the earth and from your face and will I be hiddenÖ(Gen. 4:14) . The relationship will not be the same. And this relationship is mans greatest need. It is the whole point of his existence. Yet no one thinks about it. Every sin puts at risk ones relationship to the Creator. Cain described this truth after the damage was done. The Torah records his lament because we can profit from his mistake. The truly righteous people are not immune from desire. Their uniqueness lies in how they react to temptation. Jewish law trains one not to act instinctively but to subject our desires to the crucible of reason. This is the meaning of the injunction to circumcise ones heart. We are bidden to conquer and subdue the passions and redirect their energies to the service of our Father in Heaven.